We pulled into the large parking lot in front of Tehran’s imposing central station with more than an hour to spare before our evening train. Posters of ayatollahs Khomeini, (left), who died in 1989, and Khamenei looked down on us benevolently. Inside, chaos reigned as families began or ended their New Year journey in Tehran. So many women wore billowing black chadors, it felt like we’d crashed a convention of nuns.

We lounged against the back wall, watching the rows of seats in front of us empty and then swiftly fill, while kids ran around having normal kid meltdowns. In the basement WC, toilet being one of the few words in English in the entire place, an employee decided to clean the terrazzo floor with a hose, turning it into a swamp. Some of our group raved about the ice cream, one of Iran’s favourite desserts it seems. Though the flavours were true, the texture was a little too sticky for my taste. 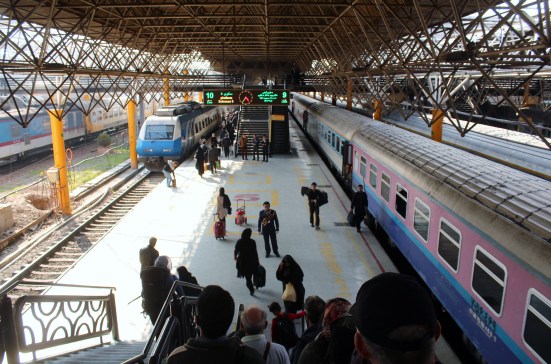 At last, it was time to gather our luggage and make our way along a wide catwalk above the trains until we reached the stairs down to our platform. The seats were a little hard in our clean, modern carriage, but there was lots of leg room. The smell of diesel was almost overpowering. At last, we were off. Soon after leaving the city the landscape turned to — nothing. Occasional mounds of earth made the flat plain look like a giant construction zone, as if left by a construction company awaiting permits to build a new subdivision. 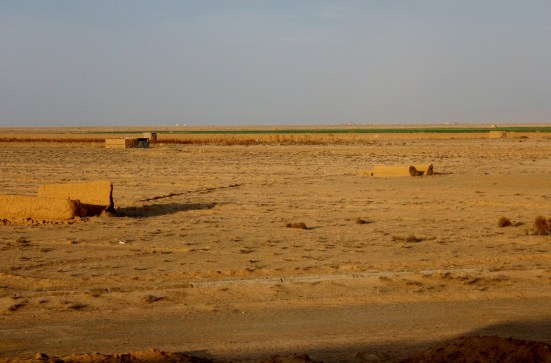 Occasional villages appeared in the distance, with corrals of yellow brick and patches of green grain irrigated by well water. Inside the train, a guy handed out snack boxes including biscuits and water. As darkness fell we stopped in larger centres, where people got on and off. At 8:30 the train stopped at a town for 15 minutes to allow people to get off and pray in the prayer room below the station. In the WC next door women loosened their hair and re-arranged their head scarves as we watched, fascinated. Though many women hate the hijab, and you’re always checking to make sure it’s on properly, I found I rather missed it (for a bit) when I got home.

At 11 pm we arrived in Yazd, jewel of Iran’s desert cities. The train station looked new, with shiny silver metal seats. Our full-size bus arrived quickly and we piled in. We were exhausted, yet Mahdi insisted on waxing eloquent about the next day, suggesting we stop for a big 35,000 R buffet dinner, which young Maddi vetoed as too expensive, and offering an optional tour of a UNESCO site or two for $$. We looked at him dully. Perhaps sensing the chill in the air he announced we’d talk about it in the morning.

At our peaceful, single-storey hotel outside the city, I bought a 300,000 R internet card, which seemed expensive. I then somehow used up all the data in a few minutes by signing up my cellphone as well my laptop and trying to download the VPN Turbo app to evade the authorities so I could use Twitter and Facebook and write on WordPress. Instead, a full page of Farsi appeared, to let me know They were watching. I was afraid to try again so quickly shut down my laptop.

Salam sohb be kheyr! Good morning! That’s about the extent of my Farsi, though I can count to 10 and read the Arabic characters.

Another lovely breakfast with dimpled flatbread made on the spot in an open tandoor. The chef made me an omelet but I didn’t have much time to enjoy it as I’d wasted too much time fussing with the internet (after buying a second card). It was time to go.

M announced the day’s plans had changed. No fancy lunch and no pricey side trips (too bad!). Instead, we’d all go together to the Zoroastrian Towers of Silence and cemetery, then visit the eternal flame and a mosque before wandering through the old city bazaar. The day’s culinary highlight was to be a visit to the best confectionary in Yazd, famous for its cookies. M. said Iranians love sweets so much that diabetes is on the rise.

Yazd is Iran’s second largest province, with a population of 1.5 million. It’s 90% desert, with summer temperatures reaching 45C, which would definitely make covering up hellish for women while the guys probably wander around in short sleeves. On the way to the cemetery we passed through the newer part of town, with its 5-storey condos, perfect for young people.

Zoroastrianism, via prophet Zoroaster (aka Zarathustra), was Iran’s main religion until Islam arrived and forced many to leave starting in the 7th century. Their creed is simple: have good words, thoughts and deeds. Oh, and there’s a heaven and hell. Apparently there are about 2.6 million Zoroastrians left in Iran and India.

As we reached the cemetery, a group attending a funeral was just leaving a grave covered with flowers. Zoroastrians were forced to give up their ancient burial practices at the Tower of Silence in the 1960s. They now place the naked, shrouded body of their loved one in a brick-lined grave and cover it ith a layer of cement. There’s no wailing when someone dies, instead friends and family express thanks for the good life they led. The women in the group were covered but colourfully dressed.

As we walked back toward the bus, the family invited us to join the mourners inside for food and drink. There were lots of warm smiles and Welcome to Iran! … how is it that everyone uses the same expression? They all wanted to take photos of us with their families. We had to remember not to reach out to shake hands when we met men; there’s no contact between the sexes in public. The rust-coloured tea was delicious, even without the white lumps of sugar offered. There were plates of tender golden flatbread to tear off and dip in the most delicious sesame dip, like liquid halva. Other plates held sprigs of herbs and green onions, or cooked potato slices and sliced hard-boiled eggs. And always tomatoes and cucumbers.

Next stop, the Towers of Silence, one perfectly preserved for visitors, the other standing alone on a steeper hill. Before it stood one of Yazd’s many famous underground water reservoirs with their vaulted roofs and four wind-catchers to keep the mountain-fed stream beneath fresh and moving. The site also included a few ancient hotels, made of sun-dried clay bricks with clay/straw as mortar, where relatives of the dead would stay for several days as they waited for the bodies of their loved ones to be picked clean by vultures in the circle on top of the hill. Three days later, they’d retrieve the body and place it in a pit dug in the centre of the circle, covering it with lye to incinerate the bones.

Back into town to see the eternal flame behind glass. It’s one of the four key elements of Zorastrianism along with earth, air and water. While locals waited two hours in the hot sun for their chance to go inside the crowded room and take a selfie beside the flame, Mahdi spoke to his buddies at the door and in we went, two by two. It took just a minute to see the flames in the 1,000 year-old fire pit. Next stop, the main square dominated by the Mirchakhmaq complex to mourn dead imams, especially favourite martyrs Ali and Hossein. 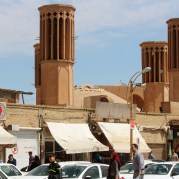 From the shrine we walked to the famous confectionary. Photos and samples of each type of cookie and baklava with the ingredients in Farsi and English filled glass cases near the front. You push your way deep inside the huge bakery to place your order, return to the front to pay then go back to pick up your neatly-wrapped order. M. bought a sample box so we could try every delicious variety.

On the way to the mosque M. showed us a few fast-food places where we could have lunch later. In the courtyard women were given polyester chadors to drape over our clothes and headscarf — a new rule apparently.. It was hot and annoying and we ended up clutching the voluminous fabric to keep from tripping on it. M. showed us how to drape it to create arms. I HATED every minute in it. Then we had to take off our shoes before walking on the carpet. He suggested we hold them in case they were stolen but it was too much, I didn’t need one more thing to hold.

Using a laser pointer he showed us the meaning behind the exquisite blue, white and gold tiles and mosaics. The white squiggles were verses from the quran, while decorative lines formed the sun, stars, constellations, raindrops and the names of beloved imams. I never tired of the colours and the intricate designs.

While a few of us sat down and chatted while putting their shoes back on I decided to go with Maddi in search of Valerie. As we left the mosque courtyard we practically threw our chadors at the smiling woman collecting them.

We were starving and headed to the falafel place down the street, hoping we’d magically be back in 15 minutes to meet Mahdi. Of course that didn’t happen. As we ate our little doughnut-shaped falafels in a bun, young English Anna came rushing up to tell us M. was waiting for us. Oops. When we arrived back at the mosque, M. announced he was taking anyone who wanted to come to a coffee shop for lunch and we’d meet there at 6 to catch the bus back to the hotel. 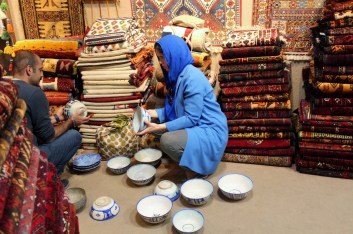 I suspect I missed a good meal but the shops in the old bazaar were surprisingly lovely so I was happy to go shopping with the girls instead. Valerie bought old ceramic bowls in a rug shop and Ciara bought a turquoise ring set in copper handmade by the gorgeous owner of another shop. Of course we needed a photo! Intrepid young Maddi from Australia, who’d booked a tour of Jordan the day after we left Iran and is heading to Africa this summer, almost bought a turquoise and gold ring. Ciara, a Dublin scientist, and Valerie from Waterford bought tiny gold earrings, carefully weighed, which involved much bargaining and, at one point, dualing calculators from our handsome salesmen. 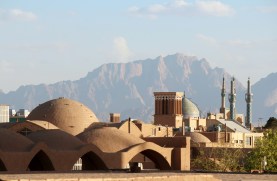 For the last hour we lounged on a raised platform on the coffee shop roof drinking lattes and admiring the view of the famous Yazd rooftops. That’s when I wished we could stay one more day and just wander around, soaking up the city at leisure.

On the way back to the hotel, M. pointed out several good restaurants close by. I figured I could manage the route and probably missed a fun culinary adventure but didn’t fancy coming back in the dark, alone. In the end I stayed in my room and snacked on fruit and nuts, with a chocolate chaser, vowing it would be my last night “dining” in a hotel room.

One thought on “Jazzed in Yazd”