Use your (veggie) noodle

Oodles of new vegetable noodles added a splash of colour to the recent Canadian Produce Marketing Association expo in Toronto, highlighting one of the summer’s top food trends.

“Foodles (‘fun noodles’) are one of the hottest-selling items we’ve ever launched,” says Noel Brigido, vice president of Mississauga produce processor Freshline Foods, whose packaged veggie noodles are competing with heavy hitters such as Del Monte.

“We sold out at retail on the first day!”

This fresh, gluten-free and vegan “pasta” is perfect for people who, for whatever reason, don’t want to cook or eat traditional wheat pasta. It also offers a quick, easy way to add more vegetables to your life and sneak them into your kids.

Brigido says zucchini is the favourite Foodle so far, and the line-up will change with the seasons.

“You can blanch them in boiling water and serve them cold,” he says, “and we see a big future for them in foodservice.”

In the past year, Freshline has seen a dramatic rise in the demand for fresh-cut fruits and vegetables.

“People want to cook,” says Brigido, “but they don’t have time and they’re looking for ingredients to make a quick meal or side dish.” 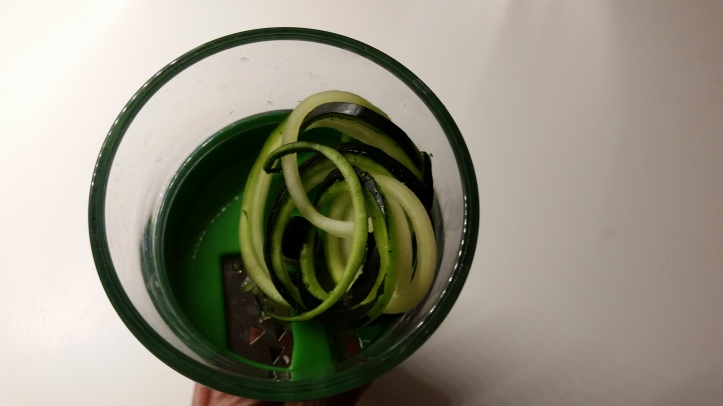 With a julienne vegetable peeler or a gizmo called a spiralizer (I love my little green Oxo) anyone can make fresh veggie noodles at home, though they may not be as long, sturdy or consistent as the commercial variety. There’s no need to peel zucchini before spiralizing them into zoodles.

Along with veggie noodles, sweet little greenhouse-grown Ontario tomatoes were front and centre at the recent CPMA expo. New varieties include Mucci Farms’ Cherto, Del Fresco’s Mini Mixers and Cloud 9 from Pure Flavor, packed in a compostable tray made of tomato fibre.

Heat oil in a large non-stick skillet over medium heat.

Add tomatoes and oregano, stirring to coat with oil. Cover and cook 5 minutes or until tomatoes begin to soften.

Stir in garlic and red pepper flakes and cook 1 minute or until fragrant. Add zucchini noodles, lemon zest and juice. Toss with tongs, mixing well, for 3 to 5 minutes or to desired doneness. Season to taste with salt and pepper. Sprinkle with pine nuts and serve immediately. Makes 2 to 3 servings.