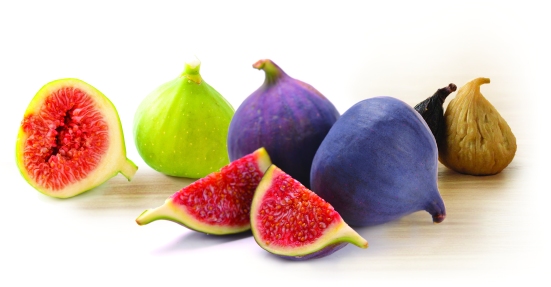 As a kid, Julian Sarraino remembers being curious about the weird fruit his family ate when they visited Sicily.

“Once I started eating them, I thought, ‘Wow, this is really good, not too sweet and with a great texture,’ ” says Sarraino, vice-president marketing and sales for Fresh Taste at the Ontario Food Terminal.

Depending on the season, the family-run importing company sells green and black figs from Italy, Greece, Turkey, Israel, California and Mexico. They’re so fragile, most arrive by air.

In Italy, many families have a sprawling fig tree in the backyard. The fruits sprout like little balloons from the ends of branches, and may produce a single drop of nectar when perfectly ripe.

Rob Gentile, chef-owner of a trio of Buca restaurants, says eating a voluptuous fig straight from the tree is an incredible experience.

“You should eat it sitting down,” Gentile says, “and reflect on how good it is.”

While he says finding a truly delicious fig in Toronto can be frustrating, that doesn’t stop him from cooking with them. He poaches the fresh fruit in sugar syrup with grappa and espresso for his brunch menus, and insists that figs, pork blood and chocolate, a regional Italian specialty, make a “heavenly” combination.

At the world Expo in Milan last month, I asked Michelin-starred chef Matteo Vigotti for his favourite fig dish. He enthusiastically described his warm fig ravioli, perfumed with a few drops of Ligurian olive oil and traditional balsamic vinegar from Modena and served with sliced prosciutto di Parma. He also makes a tarte tatin of caramelized figs scented with cardamom dust.

But don’t think figs need to be complicated. Sarraino’s favourite snack is a bagel or slice of toast smeared with cream cheese and topped with mashed fig halves. Easy and delicious.

A black fig growing in California.

More and more Canadians are discovering figs, says Karla Stockli, CEO of the California Fig Advisory Board. In 2014 we imported $15 million (4,423 tons) of fresh and dried California figs, $2.2 million more than 2013. Fibre-rich figs are also appearing on more menus, Stockli says, in dishes ranging from pizza to ice cream. 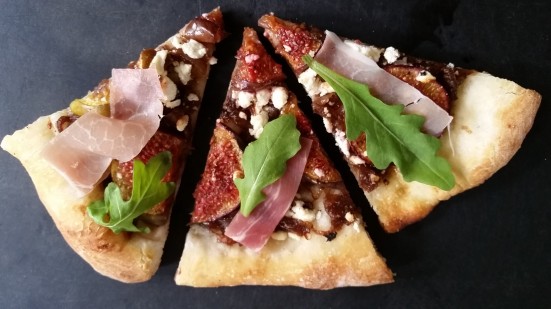 Serve small wedges of this rich appetizer when guests arrive. Adapted from the California Fig Advisory Board.

400 g fresh pizza dough, at room temperature, cut in half

For caramelized shallots, melt butter in large saucepan and cook 5 to 10 minutes or until soft and golden brown. Stir in molasses and vinegar; season to taste with salt and pepper. Cook, stirring, until liquid is absorbed. Set aside.

Place pizza stone or heavy baking sheet in oven and preheat to 500F.

Place half the dough on a 12×12-inch piece of parchment paper. Roll into a 9-inch circle with lightly floured rolling pin. Brush with half the olive oil and spread half the caramelized shallots over all, leaving a ½-inch  border.

Arrange slices from two figs ½-inch apart over shallots and season lightly with salt and pepper. Sprinkle half the goat cheese and 1 tbsp Parmigiano evenly over all. Transfer sheet with pizza to preheated pan and bake 10 to 15 minutes or until cheese and edge of crust are lightly browned.

Repeat with second pizza or bake both at the same time.

Transfer to cutting board, cool slightly then cut in wedges. Garnish with sliced prosciutto and arugula. Serve warm or at room temperature.

2 thoughts on “Falling for figs”