You won’t find these donuts at Tim’s, but you may catch a glimpse of them at a local farmers market.

“As a specialty item, I think it’s going to be a winner!” says Milan Bizjak, who grows tender fruit in Vineland and Beamsville.

Of course as soon as I wrote about them a 3 a.m. rainstorm destroyed the rest of this year’s crop.

The adorable squashed-looking fruit with yellow or white flesh and a tiny pit are also called Saturn or saucer peaches. They’re not genetically modified, but have been cultivated in China for centuries and grown in the U.S. since the 1990s.

Every donut variety is different, says Bizjak. His first BuenOs had a deep beautiful blush and firm flesh, while one of his two TangO varieties is almost lime green with sweeter, juicer flesh.
Phil Tregunno, chair of the Ontario Tender Fruit Producers’ Marketing Board and one of the province’s largest peach growers, counts doughnuts among his 500 acres of peaches and nectarines.

Niagara peaches have happily soaked up this summer’s heat and moisture, he says, and there should be plenty until mid to late September.

We should also see a lot of nectarines this month, he says. They’re another type of peach with less fuzz.

Now that the donuts are thriving, he and other local growers are trying to bring fancy new plum and apricot trees across the border to see how well they grow in Ontario.

If they succeed, local plumcots and apriums may be as common in 10 years as, well, donuts. 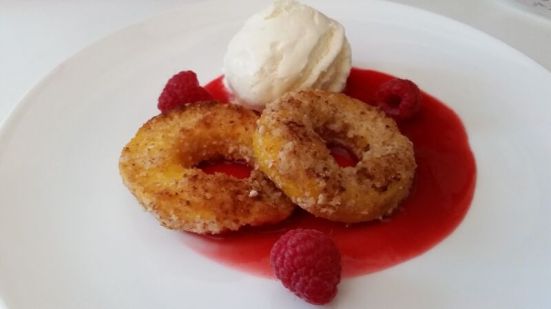 Adapted from a New York Times recipe by food writer Martha Rose Shulman, this simple dessert shows off the fun side of donut peaches.

To make raspberry sauce, combine sugar with water in small saucepan and bring to a boil. Stir until sugar dissolves. Reduce heat to low and stir in raspberries and liqueur. Cover and cook 10 minutes. Strain sauce into a bowl through a fine mesh sieve, pressing down with back of a spoon. Discard seeds. Return sauce to pan and keep warm.

Remove peach pits with an apple corer or small knife. To remove skin, peel with a serrated peeler. Alternatively, drop peaches in a pot of boiling water and blanch 30 seconds. Transfer to a bowl of ice water. Drain and slip off skin.

Cut peeled peaches in half horizontally and pat dry.

Process almonds and sugar in a food processor until finely ground. Spread on a plate or paper towel. Gently dip each peach half into the mixture to coat both sides and transfer to a plate.

Heat 2 tbsp (30 mL) butter in a large heavy non-stick skillet over medium-high heat. When foaming subsides, add half the peach halves. Do not crowd pan. Sear about 1 minute, until almond coating browns; turn with tongs. Sear another 30 seconds to 1 minute and remove. Repeat with remaining halves, adding more butter if necessary.

Spoon a few tablespoons of warm sauce onto each dessert plate and top with 2 peach halves. If desired, serve with vanilla ice cream and extra raspberries.