Walking in the Italian woods can be perilous in the fall, as ripe chestnuts rain down from above and land with a thud.

On impact, the tennis-ball-sized pods burst open, revealing three burnished brown chestnuts, two with fat rounded sides and the middle one flat on both sides.

From the end of September to November, many of these fallen chestnuts are gathered by hand in baskets, then washed and packed in mesh bags to ship around the world for the holidays.

The annual harvest is an excuse for celebration. In Piedmont, every town and village hosts a castagnata, where locals of all ages gather to eat cones of piping hot chestnuts roasted over a fire in hole-filled drums until their shells split, revealing the pale meat inside.

Sweet, rich roasted chestnuts are also sold on street corners across Europe. Aunt Pat used to buy them for us from a cart in front of the Royal Ontario Museum.

While I love eating this low-fat, low-cal snack, peeling them is hard work. Besides the leathery outer shell, the meat is sheathed in a furry brown pellicle that’s a pain to remove, even after the nuts have been boiled or roasted.

To coax more North Americans to cook with chestnuts, companies such as Raffael vacuum-pack pre-cooked chestnuts with no preservatives. They’re also sold in jars and cans.

Since the fresh season is short, better get roasting!

As holiday preparations rev up, the Raffael chestnut factory near Avellino in Southern Italy is eerily silent. Its last marron glacé, individually wrapped in gold foil and snuggled in elegant boxes, rolled off the line in early November to be shipped to specialty shops in Toronto and around the world. Italy and France both take credit for this luxurious treat of cooked chestnuts drenched in sugar syrup, and both use the French name. Italy has long been Europe’s top chestnut producer, though it now ranks third behind Portugal and Turkey.

Chestnuts are easier to peel when still hot.

Boil: Cover nuts with cold water and bring to a boil. Reduce heat and simmer 15 to 20 minutes. Turn off heat and remove from pot a few at a time to peel. Good for mashing, soups and baking.

Roast: To prevent nuts exploding in your oven and make them easier to peel, slit shell straight across the middle of the rounded side with a sharp paring knife, piercing outer and inner shell. Place on cookie sheet in a single layer and roast 15 to 20 minutes at 400F until shells pull away from flesh. Peel and serve immediately. Get friends to help!

Fire: Slit shells and place chestnuts in an aluminum pie plate punched with holes over hot coals. Or invest in a special roasting pan with holes and a long handle. Flip often. 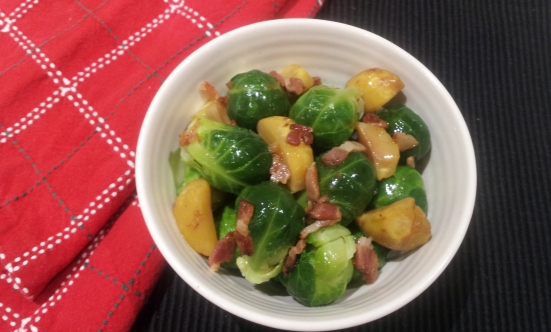 For a festive side dish, add umami to boring Brussels sprouts with fresh chestnuts and a little bacon. Adapted from the LA Times.

For fresh chestnuts, remove outer and inner shell with a sharp paring knife. Cut in quarters and set aside up to two days, covered in refrigerator. For cooked chestnuts, remove from package and leave whole or cut as desired.

Cut an X in the stem end of each Brussels sprout and remove any loose or discoloured outer leaves. Steam over boiling water until tender, 8 to 10 minutes. If large, cut in half lengthwise. Prepare up to 8 hours in advance; cover tightly and refrigerate.

Heat a skillet over medium heat and cook bacon until it softens and releases its fat, about 5 minutes. Add shallot and cook 1 minute. Add fresh chestnuts (cooked ones don’t need simmering) and broth, cover and simmer until tender, about 15 to 20 minutes.

Add cooked chestnuts if using, and Brussels sprouts. Cook 5 minutes to mingle flavours. Season to taste with salt and pepper.