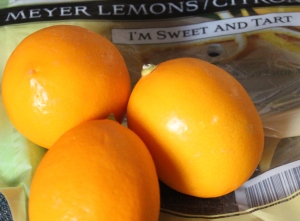 When life gives you lemons, make it a Meyer.

This California import, with its sunny yellow glow and heady tropical scent, is the Lamborghini of lemons. And its popularity is revving up, from restaurant menus to a supermarket near you.

A natural cross between a lemon and a tangerine, Meyers are beloved by chefs for their loads of juice and tangy flavour, milder and sweeter than familiar Eureka or Lisbon lemons. Now it’s our turn to discover them.

Toronto chef Lorenzo Loseto of George restaurant brightens winter menus with the Meyer’s deep flavour. His chunky chutney blends the juice and zest with white wine, onion, celery and spices, including star anise. Caramelized mangos in lemon juice star in sticky pudding, and he squeezes the juice into a shimmering lemon tart.

Rob Gentile, executive chef at Buca, cooks with every citrus variety he can find during the peak winter season, from the Buddha’s hand citron, with its long, dry pithy fingers, to the cara cara, a juicy navel orange with sweet pink flesh.

“Meyers have a unique flavour, citrusy and not too sharp,” says Gentile, who slices and cures them in sugar and salt and serves tiny triangles atop a creamy buffalo mozzarella and beet salad.

Keith Froggett, chef/owner of Scaramouche, finely chops the entire lemon to make his favourite winter relish with shallots, sea salt, pepper, olive oil and chives. The colourful combo adds sparkle to halibut and haddock, and he slips a spoonful into the sauce of his duck three ways — sausage, breast and confit.

“It goes with anything,” he says.

José Fu, the “sour” product manager at Sunkist Growers in California, says the co-operative expects to pack more than 60,000 cartons of Meyers this year, compared to 3,000 in 2007. But they remain a niche product, he says, when you consider Sunkist will pack 30 million cartons of regular lemons in 2011.

Explorer Frank Meyer discovered the smooth-skinned lemon in China in the early 1900s. In his book The Fruit Hunters, Montreal journalist Adam Leith Gollner describes him travelling through dust storms and trekking over Siberian glaciers in search of rare fruit.

To make sure shoppers don’t think this pricey citrus ($2.99 to $3.99/pound) is just another lemon, growers have bundled their hand-picked Meyers in eye-catching new packages.

Duda’s zippered plastic bag, available until the end of March, shouts “I’m sweet and tart. Try me!” while Sunkist’s Meyers, snuggled in yellow net bags, calls itself The Culinary Favorite.

Fu says there are more lemons in his groves, including a striped variety with pink flesh, and new seedless varieties.

Gentile, meanwhile, is experimenting with lumpy Cedro lemons from Sicily in his Buca restaurant.

Like the Meyer, he says, it was love at first squeeze.

Thin-skinned Meyers are softer and juicier than regular lemons.

The bright yellow skin takes on an orange hue as it matures.

Store up to two weeks in the fridge.

A spritz of juice adds fat-free sparkle to seafood, salads and steamed vegetables.

Place slices over fish before baking.

Grill or roast Meyer circles in a little oil and serve with chicken or fish.

Grate zest into pancake batter, or any batter.

When baking with Meyers or making lemonade, use up to one-third less sugar.

Surround a roasting chicken with chunks of Meyer lemon.