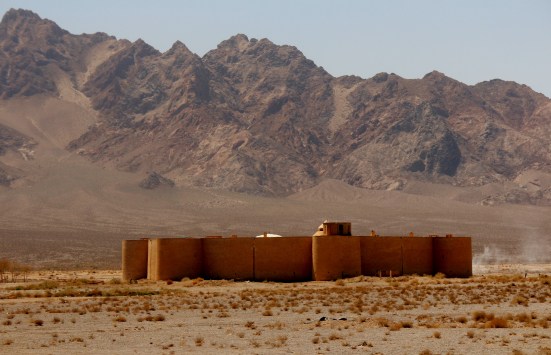 We were on our way to the Zein-o-Din caravanserai for the night, the Iranian equivalent of a stagecoach inn, a place to rest, dine and break up the long trek through the desert.

Claude from Cochrane communes with a camel

Unlike travellers traversing the Silk Road centuries ago, when the inn was built, we arrived by bus instead of by camel. But we did see a few of the shaggy long-legged beasts in a village outside Yazd offering rides to kids. We also stopped at a vast mud and straw fortress built by locals to safeguard themselves, their food and valuables when invaders threatened. Of course the Persians couldn’t resist stacking the sun-dried bricks in attractive patterns and finishing the tower with an artistic flourish. Behind garden walls, last year’s pomegranates withered on the branch. Imagine having so many pomegranates it’s not worth harvesting all your trees!

Since we weren’t scheduled to eat lunch at the inn and there aren’t a lot of restaurants (or gas stations) in the desert, though we did see a few cheetah crossing signs, Mahdi offered to shop for provisions in Yazd and promised us a feast on arrival at Zein-o-Din.

We had no clue what to expect — would we all be sleeping in a dorm room? But it was a big deal, apparently, the first time a G Adventures group had stayed overnight at this restored inn along the Yazd to Kerman highway. Most groups stop for a meal then resume their journey.

The bus trundled along through the brown landscape, then suddenly turned off the highway. Ahead of us stood a circular reddish-brown adobe fortress with mountains in the distance. We’d arrived!

Through the tall faded wooden door into the foyer, where piles of Persian carpets lay casually stacked and posters promoted restored caravanserai in other parts of the country.

Our “rooms” were hidden behind one of two closed doors, each leading to a long curved windowless corridor with raised, enclosed wooden sleeping cabins open to the vaulted stone ceiling.  It looked like a sleeper car from an old Ontario Northland train. Inside each room the plywood walls and floor were covered with carpets, while a thin duvet served as a mattress.

Once we’d settled in, it was time for our paper-plate lunch in the round great hall, open to the sky. Mahdi had bought cans of tuna and stewed eggplant, sheets of golden bread to tear off and smear with feta cheese, olives, cucumbers, roma tomatoes, potato chips, non-alcoholic beer and sweet, soft black dates for dessert. 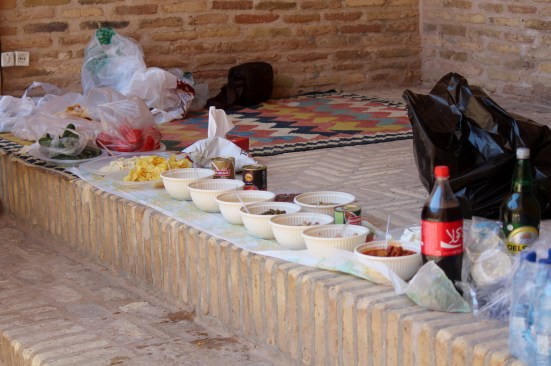 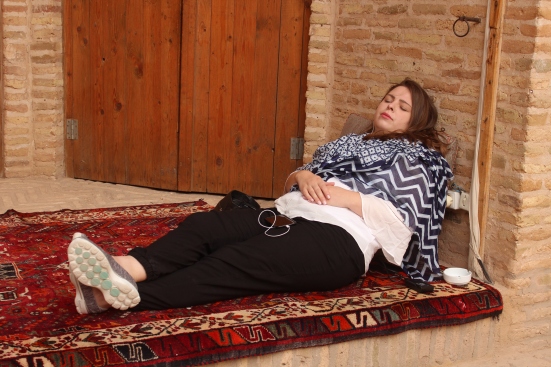 Free time until dinner at 8! With no wi-fi or shopping, entertainment choices were limited to snoozing and reading. When the management decreed we were free to wander without our head scarves within the hotel walls, the young women in our group rushed to the communal washroom to wash their long hair then headed for the rooftop terrace, delighted to dry it in the hot sun.

In mid-afternoon an Italian group arrived to spend the night. One man, on hearing there was no wi-fi, shouted Porco Miseria!

I decided to take a walk in the desert to the bare mountain. Though it looked close enough to touch, 79-year-old Paddy from Auz warned me that mountains are always further than they seem. An hour later, with the sun setting, I had to admit he was right, though another 15 minutes might have done it. I did discover there is life in the desert, from the long-eared rabbit that sprang out of nowhere to the brave shrubs and wildflowers poking up through the gravel beside a dry river bed.

By 8, the dining room was full of boisterous tour groups and a few locals. We helped ourselves to the buffet of saffron chicken, stewed eggplant and sliced zucchini in tomato sauce served with mounds of perfectly-cooked basmati rice, washed down with endless cups of tea. Afterward we returned to the roof to take in the starry night, undisturbed by city lights. There was my favourite, Orion. 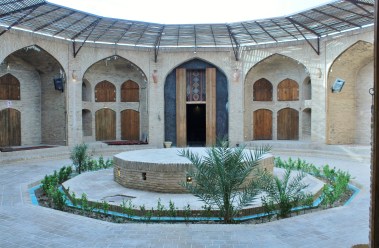 That night, after positioning a second thin mattress over mine to soften the “bed”, I had the best sleep yet. Though I did wake up at 4:30, as I’d been doing all week. I decided to wander to the communal bathroom, which involved walking to the end of corridor, through the foyer and into the circular great room, open to the sky and bracingly cold after our warm windowless corridor. Were the animals tethered here? One of the Italian guys stood outside his room, smoking, and a staff member slipped by with an armful of towels. To a guy used to covered-up females, I must have looked pretty funny in my bare feet and nightshirt decorated with a  Siamese cat on a cellphone.

The next morning at breakfast (more fresh bread! more yogurt and jam!) I was astonished to learn that the others had had their worst sleep ever. They complained of the door slamming, kids running up and down the corridor, an Iranian guy with a deep loud voice on his cellphone for hours and “aggressive farting” from one of the compartments, which left the two women next door trying desperately to smother laughter in their pillows. 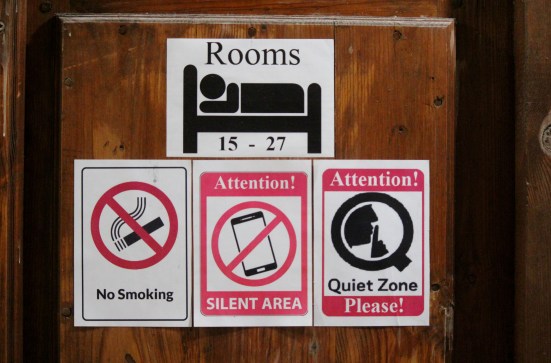 I’m still amazed I heard nothing. On the bus, everyone urged Mahdi to complain to the management and suggest that the rules posted at the entrance to each corridor be written in Farsi as well as English, though the line drawings, like a cell phone with a line through it, were pretty clear!

Though the inn had seemed busy, Madhi said business is down this year, with fewer tourists and locals feeling the pinch of a poor economy. A year ago there would have been 300 people for dinner, he said, requiring three sittings.

6 thoughts on “Do you caravanserai?”