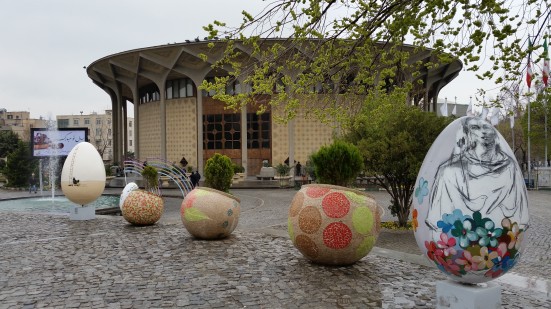 After months of anticipation and fussing over what to pack, March 23 arrived. Off to Iran for a G Adventures tour.

Air France made the first leg a delight with an upgrade to their luxurious business class,

where foie gras and Daniel Boulud’s salmon with fennel, chickpeas and sumac awaited for dinner. After a movie or two I stretched out in my personal pod and slept under a duvet. Bliss!

On arrival at Charles DeGaulle airport I saw a sign for the free Instant Paris lounge in Terminal L, highly recommended for its comfy chairs, but ended up in a security line upstairs and missed my chance to try it.

Of course, this being Paris, even wandering around the terminal is a feast for the senses. After stopping for a croissant and café au lait at caterer Paul, I visited the Picasso exhibit tucked among the designer clothing shops.

The economy Air France flight to Tehran wasn’t as fancy but still offered Champagne, my last alcohol for two weeks. Just before landing, in a sweeping motion that rippled through the cabin, all the non-Muslim women covered their heads with a scarf, tossing the ends over their shoulders.

The customs officer took such a long time checking my passport and visa, I could hardly breathe. But soon enough I’d retrieved my bag and found a taxi driver holding up my name at the gate. I’d paid far too much in advance for the 45-minute trip, but feeling safe on a dark night in a new country with little English was worth it.

It was cold, unseasonably, the driver said. On the way into Tehran he pointed out the tall, thin, brightly-lit minarets of a Disney-like castle, Ayatollah Khomeini’s tomb. Though many roads in the city were festooned with lights for the Persian New Year, as we neared the hotel the streets were dark and empty, shops shut tight.

I changed $100 US at the hotel’s front desk and became an instant millionaire. But heading out in the dark to find an open restaurant and spend some of my new rials did not appeal. Instead, I scrounged some chocolate and nuts from my bag then drifted off, gratefully, to sleep in my narrow twin bed.

Saturday dawned grey, wet and cold. In fact it rained the entire day. The breakfast buffet was a highlight, offering stewed lentils and scrambled eggs, bowls of plain yogurt and torn pieces of thin, charred flatbread, kiwis, oranges, cucumbers and red, tasty plum tomatoes, the first of many. 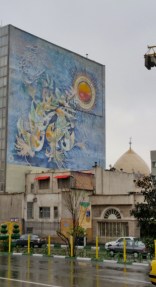 The Aramis Hotel was on the main drag, Vali-asr, running from the Alborz mountains to the train station. At 18 km, it’s apparently the longest street in the Middle East!

I figured if I started walking south past the biggest intersection I’ve ever seen I’d surely bump into some lovely landmarks, shops or museums. Wishful thinking, though I did pass lots of New Year egg sculptures and the elegant Shah Theatre. Mostly, I walked by small shops that changed their focus every few blocks, from magnificent textiles and drapes to clothes to running shoes and gym gear to treadmills. When I hit the health care block — pregnancy pillows to wheelchairs — l figured it was time to give up and return to the hotel.

After changing my soaking wet shoes, I realized it was after 1 pm.  The young woman at the desk suggested the hotel restaurant for lunch so up I went to the near empty room.

My chicken kabob took 45 minutes to arrive (the young waiter probably wondered why I was so agitated!), but it was delicious. By then I’d read the note from our group leader Mahdi, who suggested visiting the grand bazaar.

When I asked about it at the front desk one of the women said “It’s closed,” then sent me to the guy at the taxi desk who spoke more English. Of course he was happy to arrange a cab to the bazaar for thousands of rial which (after I said it sounded expensive) turned out to be $7 US. I asked if there was a subway nearby for the trip home. Yes.

A little guy appeared in the lobby and had a long conversation in Farsi with the head guy before ushering me to his old Toyota nearby. Minutes later he turned onto an “expressway”, where we sat for the next 20 minutes in a typical Tehran traffic jam. As we crawled along we both watched the TV screen to the right of his steering wheel, when he wasn’t watching his smart phone. At last he said Grand Bazaar, and stopped in front of a one-storey brick building with a modern high-rise sticking up through the middle. It housed floor after floor of tiny clothing boutiques, packed with families. The scarf vendors were particularly popular with their piles of beautiful silk and cotton squares.

I asked a stylish young woman if she spoke English and could point me to the carpet and spice areas. She said “Wait!” and ran over to get her friend Fatima. Who arrived trailing five friends or family members including a young boy who stared then beamed at me. Fatima announced the bazaar was closed because of Nowruz, the New Year. The woman at the desk had been right!

I wandered a bit then went down into the subway. As I stared at the mostly Farsi map I heard, “May I help you?” It was Fatima and co. They proceeded to buy me a ticket from what looked like a lottery kiosk beset by a frenzied crowd reaching in for bits of white paper. Apparently you don’t buy a subway ticket with a 50,000-rial note, the smallest I had. We showed our tickets to a guard then passed through an electronic gate.

There was great discussion about which line I needed, then Fatima announced I should follow them. Though the doors opened to a completely jam-packed car, they all said PUSH so I did and we all got on. When we came to a junction she got out to show me which train to catch and we said goodbye.

I soon realized my stop was not on the English/Farsi map, and asked a young guy if he spoke English. Which he did, well. And said he’d accompany me to the next junction since he was going that way.

I thought I had to travel in the women-only car but he said no. It was me, him and one other woman among a sea of pungent men. My new friend was a single software engineer who worked in a bank and dreamed of emigrating to Australia. Canada’s too cold, he said. When we reached my stop I shook his hand and wished him well. It was the first of many encounters with smiling locals who went out of their way to make us feel welcome, or Well Come as our tour bus insisted.

At last, it was time to meet Mahdi and my fellow travellers at the orientation session. Nine women and two men, aged 24 to 79, from Ireland, England, Australia plus a pair of Canadians from the Northern Ontario town where I was born, Cochrane! Two were mother-daughter duos. Janet said she’d suggested a trip for her mom’s 75th birthday year and was shocked and horrified when Sue chose Iran!

Mahdi later told me four Americans were booked to join us, but were forced to withdraw when Trump began ranting about Iran. Such a shame, since there’s never been a better time for real people from different countries to meet and listen to one another rather than posturing politicians.

Mahdi took us on a tour of the neighbourhood, then ushered us into a basement restaurant with elaborately-tiled walls and an English menu. My table shared a few dishes including a minced lamb kabob with rice, a split pea stew topped with French fries and eggplant stew finished with a puddle of thick beige whey and

Good food, good company, it promised to be an amazing journey.

6 thoughts on “Well Come to Iran”