This buff’s for you

With its smattering of palm trees and Mount Vesuvius volcano in the distance, the region of Campania in southern Italy doesn’t look at all like the Wild West, yet 100,000 water buffalo roam its grassy plains.

When they tire of roaming, the shaggy horned beasts hang out in a barn, ankle-deep in mud, (it makes them feel at home, apparently) waiting for the food truck.

They’re descended from a Mediterranean breed brought to the area by the Arabs in the 15th century.

We only saw a few buffs on our visit to Fattorie Garofalo, which boasts 7,500 animals on its five farms, but we saw plenty of the famous mozzarella made from their rich milk. 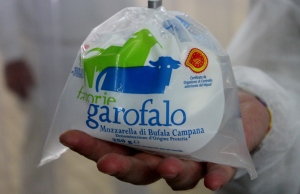 Throughout the company’s pristine plant in the town of Capua, balls of fresh, chewy buffalo mozzarella float in stainless steel tubs, awaiting the packing line and transportation to 30 countries.

Our guide, Mario Pietroluongo, said Garofalo’s weekly Canadian order (we’re the company’s  fourth largest export market) leaves the Rome airport on Sunday evening by plane and arrives in Toronto eight hours later. You can even buy buffalo mozz at the airport in Naples, but don’t try bringing it home!

Each buffalo produces only 25 litres of rich milk a day, compared to 60 litres daily from a cow, and it takes four litres of milk to make one kilo of cheese.

To ensure you get the real thing, look for the DOP (protected designation of origin) seal on the bag or tub, which shows the mozzarella has been produced in Campania or one of  two neighbouring areas following strict rules.

At Garofalo, Italy’s biggest producer of DOP buffalo mozzarella (7,400 tonnes/year) the process of making the soft, smooth rounds is highly mechanized. The fresh milk  is heated for 26 seconds at 72C to pasteurize it, then pumped into huge cauldrons in the plant, where rennet is added to coagulate the milk.

Within four hours, the milk has separated into liquid whey, removed for butter or ricotta, and solid pieces. They’re cut with a special curved blade before being transferred to a machine where the paste is stretched with the help of water and steam until pliable enough to form rounds.

They range in size from bocconcini smaller than ping pong balls to 250-gram balls the size of a grapefruit. They’re quickly “shocked” in cold salted water, which helps form a thin crust, and refrigerated.

The process takes eight hours from start to finish, says Pietroluongo, yet the cheese is never touched by human hands.

Garafalo also sells buffalo ricotta in Canada, and the company plans to start producing burrata – a purse of smooth mozzarella filled with strips of fresh cheese doused in cream – early next year. 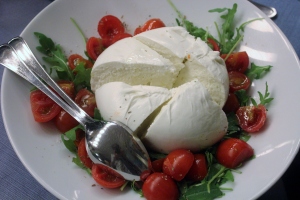 Things to know when you buy an expensive round of mozzarella di bufala: