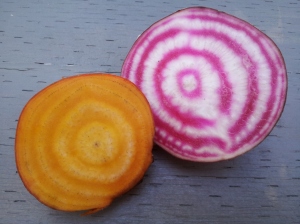 Check out my first Toronto Star cooking video at http://bit.ly/19mOdm7

If you’ve never eaten beets, or were forced to eat one too many canned or pickled beets as a child, Caroll Collins has a message for you:

Give beets a chance!

Collins, co-owner of Collins Farm Produce in Puslinch, between Hamilton and Guelph, probably introduced more people to beets than anyone else in the GTA in her eight years selling fresh vegetables at farmers markets.

“I had young men in their 20s saying they didn’t know how to cook beets, so I was their teacher,” says Collins, who’d slice up red, golden and candy-cane beets and let people taste them raw.

She sent her “students” home with basic baking and boiling instructions, urging them to report back the next week. Then she’d start giving them simple recipes, like her famous Gold Beet Salad with feta from Collinsfarm.ca.

Golden beets, with their orange skin and deep yellow flesh, are milder and a little less earthy than red beets. Sweeter candy cane-striped Chioggia beets are psychedelic when raw but their stripes can fade when cooked.

These specialty beets are still hard to find outside farmers markets because they’re twice the price of red beets. The seeds are much more expensive to buy, Collins explains, and varieties are limited.
“When I sold golden and candy-striped beets at farmers markets, people were begging to know where to get them,” she says. “Yet the big supermarkets are hesitant to carry them.”

But there’s no shortage of red beets around, with or without their edible green tops. You’ll also find beets on trendy restaurant menus, in everything from soup and salad to risotto.

For versatility, nutrition and great taste, these roots can’t be beet, er, beat.

Boil: Boiling is the fastest, easiest way to prepare beets and the skins slip right off after cooking.

Roast: Wrap whole beets individually in foil. Bake in preheated 400F (200C) oven about 1 hour, or until tender. Let cool a few minutes, then run briefly under cold water and rub off skins with a paper towel.

BBQ: Collins rubs whole beets with a bit of oil and throws them on a medium-high gas grill. Close lid and cook about an hour, turning often, until skins are charred and interior is tender and sweet.

Salad: Julienned or grated raw beets brighten any green salad. Or  slice cooked beets and serve with goat cheese rounds  between the slices, like a caprese salad. Cubed beets and oranges also make a great salad.

Juice: Raw red beets are a favourite for juicing. Mix with carrots and other vegetables.

1. Prepare fresh beet greens like spinach, cooked in the water clinging to the washed greens.

2. Sauté in a little olive oil with onion and garlic.

4. Chop and add to homemade soup.

Even people who think they don’t like red beets will love this easy, beautiful dip, adapted from Bradford beet grower Hillside Gardens.

Scrub and trim beets, leaving 2 inches (5 cm.) of stalk. Boil in lots of water about 45 minutes, until tender, or wrap individually in foil and roast in a preheated 400F (200C) oven 1 hour or until a toothpick comes out clean. When cool enough to handle, slip off skins or rub off with a paper towel.

Check seasoning and add more lemon juice if needed. Refrigerate in an airtight container up to one week. Serve with vegetable sticks, crackers or thin slices of baguette.

2 thoughts on “Give beets a chance”