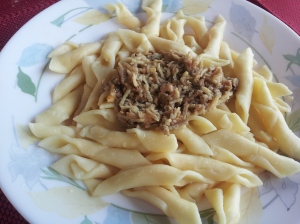 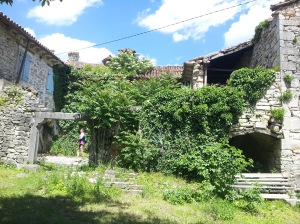 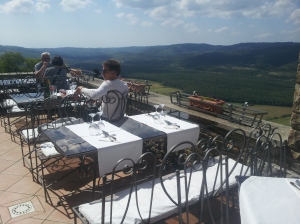 Our second last day dawned grey with the promise of warm sun. Surely nothing could interfere with today’s 30- km bike ride.

We arrived in Istria’s medieval town of Roc, with its flower boxes and thick limestone walls. Between the 12th and 20th century it was the centre of Croatian publishing, based on the Glagolitic alphabet. The letters remind me of Elven runes from Lord of the Rings.

Our guide Alez awaited, ready to ride in his Tour de France-type gear. He and Mia had the usual impenetrable conversation in Croatian. Oh no, the afternoon portion of our ride was cancelled because the road by the river was too wet and muddy!

I was disappointed, but figured one 90-minute ride would do me just fine.

In the next breath, Mia announced she, Alez and the tourist board rep would look for an alternate road so we wouldn’t be deprived of our full three hours of cycling. While they consulted a map, we each chose a mountain bike and headed to the nearby parking lot to practice.

I got on my black steed and immediately wobbled around as if I’d never been on a bike. I hoped Alez wasn’t too alarmed. Once I got the thing steady, I wished I’d paid more attention to the gears during the previous ride, since this time I’d need to do more than brake and panic.

The saddles were hard as ironing boards, but surely 90 minutes wouldn’t cripple me for life.

We set off on lovely asphalt roads about three metres wide. In minutes the experienced riders had disappeared, flying down the first hill in formation like a flock of Canada geese.

It was hard to take in the view as I concentrated on keeping wheels, gears and handlebars aimed in the right direction. But I did have the wonderful sensation of being alone under a big blue sky, surrounded by green trees that arched toward the centre of the road and breathing fresh air scented with wildflowers. The wind in my ears almost drowned out the birds.

Riding on smooth pavement proved much more relaxing than riding on mountain trails, and sailing downhill was exhilarating, though we did hit the odd patch of bone-rattling gravel. Twice we stopped to let giant tour buses pass since there wasn’t room for them and us on the narrow road.

Our first stop was Kotle, a village beside a rushing stream with the remains of an old mill. It’s been abandoned for 30 years, but Mia said some homes have been restored as summer cottages.

I hoped we’d continue on our mostly downhill trek to Hum, the world’s smallest town, but no. I was soon huffing and puffing up a baby hill while trying every gear combination possible. Giving up, I dismounted and walked the heavy bike to the top.

No guide, no signs, but I was pretty sure I was going in the right direction. The road passed monuments devoted to the mysterious alphabet, including one Stonehenge-type circle that spells out Istria.

We gathered on the terrace of Humska Konoba, probably the village’s only restaurant, and ordered two Istrian specialties — scrambled eggs with bits of flavourful wild asparagus and fuze, pale hand-rolled pasta tubes warmed in butter and topped with finely grated black truffle.

The pasta looked like garganelli from Emilia Romagna without the eggs to make it yellow. We were hoping for more truffle flavour, but I've often been disappointed by truffles so wasn’t surprised.

Conversation turned to the afternoon’s program. We could retrieve our bikes and head back to Roc by an alternate route (with more hills), or drive to a famous hilltop town and drink wine.

You can probably guess which route I chose.

We drove past Buzet, the town where we would spend the night, and continued through miles of dense forest famous for truffles. Then up and up to the top of tourist mecca Motovun, where we walked the ramparts and popped into tiny wine and souvenir shops. When we’d seen everything, we sat on a terrasse with a bottle of Istria’s refreshing white malvasia and admired the panoramic view of the rich agricultural land below, dotted with vineyards and olive trees. It could have been Tuscany or Umbria, at a fraction of the price!

Back in Buzet, we stayed at the funky-elegant boutique hotel Vela Vrata beside the well-stocked tourist office. Renovated in 2010, the hotel has rejuvenated the ancient town, forgotten since the 70s as locals began congregating in the sprawling new town below.

The three-storey climb with heavy bag was worth it — I loved my garret room with its flamboyant bathroom.

Dinner, served by the doorman/reception desk clerk/host, consisted of truffled cheese, leek and potato soup and nicely cooked chicken. Not sure about the asparagus ice cream, but happy to see they’re using local, seasonal ingredients in creative ways.

At breakfast, always bread, cheese and ham with the promise of hot eggs, I followed Cam’s lead and tried the chocolate croissant, a mouth-happy match with a cappuccino made with Franck coffee, a Croatian favourite.

After a quick tour of the old town, we set off in the van to hunt for truffles.