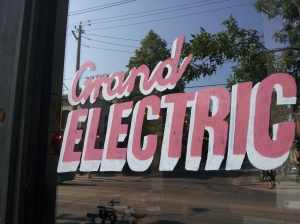 I’m not sure when dining out became survival of the fittest, but I rather miss the good old days when you could swan into any restaurant at the appropriate time to claim your reservation, sit back in a comfy chair and actually have a conversation over a great meal.

I was thinking about this as I stood outside a locked door on Queen West last week, the words Grand Electric painted on its window. It’s the only sign that you’ve arrived at one of TO’s hippest, hottest, loudest resto-shoeboxes.

It was 5:15 and I was the first person in line. Far from feeling triumphant – knowing my two accomplices and I would get a seat for sure when the door opened at 6– I felt embarrassed. What am I doing here?

Passersby seemed bewildered. Why are you standing in line? some asked. Is it good? Dunno! The rest were panhandlers, hoping for a bit of change from the well-heeled crowd.

After sending my friends to wander among the cool shops springing up in this lost bit of Parkdale, I tuned in to the two young guys who arrived behind me at 5:30. They were discussing where to go on their next trip to Italy. Having done Florence and the other touristy cities, they figured it was time to explore the countryside, though they weren’t quite sure where to begin.

At 6 p.m., Sandro counted 35 people in line. Perfect, we’d all get in. Otherwise, you leave your name and cellphone number with the hostess and they’ll call you when a table is ready … in an hour or three. He also announced we were probably the oldest people there.

I thought we’d have our choice of tables but no, we were shown to the tiniest little wooden thing, barely big enough for two, with a third seat facing a black and white collage of Mexican lucha libre fighters on the wall. I know this from watching the Jack Black movie.

In minutes, every table and every seat at the bar were taken. The server asked if it was our First Time and gave us the tour – the blackboard above our heads held the drink selections, the blackboard at the front of the dining room held the Mexican food menu, one list for tacos ($3.50) and the other list for sharing plates ($9-$13ish). The

bourbon selections were on display behind the bar.

While we were digesting the various menus and adjusting to the NOISE, I mean music, food began arriving all around us. When you’re a regular here, ordering is easy. As you’re seated you yell GUAC, as in rich chunky guacamole in a little stainless steel bowl with what looked like a rice crisp mast stuck in the centre (though it may have been fried pig skin!) surrounded by fried tortilla chips. Then you yell Grand Electric Sour, and a glass of vanilla bourbon arrives juiced with lemon, sweetened with agave syrup and topped with a bit of egg white froth. Delish.

Of course we wanted to try all the tacos, but our server warned that they’re really small, and if we ordered one of each we’d only get one bite and things could get messy. After some consultation (actually, my friends simply mouthed Do What you Want! since it was impossible to talk), I ordered a few single tacos and two of the Baja fish tacos, which she said were a best seller, along with a few shared dishes.

The food arrived quickly. Three soft little tortillas mounded with filling in an aluminum tin, and the two fish tacos in a separate tin. Our server was lovely but resisted bringing a knife so we could cut them neatly. There were no plates. But we each had a full-size cotton dishcloth for a napkin (which, Sandro noted, smelled like they’d sat around a greasy kitchen), so at least our clothes were safe.

There was no need to talk … with each mouthful we looked at one another and signalled Mmm. We shared nuggets of roasted pork belly festooned with pineapple bits, a mess of meltingly soft and savoury beef cheek topped with jalapeno rings and an unremarkable (but not creepy) flat bit of pig-tail meat topped with pink onion rings. The two pieces of fish were perfectly battered and deep-fried, topped with shredded radi

sh and cabbage and dribbles of sauce.

The layers of flavours built to a crescendo in a scrumptious crispy pork salad. Fried pork mcnuggets dusted in rusty pimenton powder, nestled in a salad of finely shredded red cabbage and thin apple slices, with bits of fried radicchio and cubes of crisp pickled jicama. Sweet, tangy and smoky, every bite a riot of textures and flavours.

Though the music was still blaring, I found myself smiling and nodding to the beat. Good food will do that to you.

We didn’t need dessert, but couldn’t resist a baby mason jar of silky key lime custard on a graham crust piled high with whipped cream, which got knocked into the nearest glass.

By 7:15 we were back outside in the evening sunlight, grateful to hear again. While we didn’t discuss a return visit, there were a few more menu items I wouldn’t mind trying. And now that we know the drill … !