There’s no better time to scout out great gelato than a sun-blasted holiday weekend.

G for Gelato and Espresso, at the corner of Jarvis and Adelade, opened last November. The G stands for Gerardo and Giuseppina Polsinelli, who began selling homemade gelato from a refrigerated cart on a bicycle in the 1960s in the town of Sora, just south of Rome.

They built up a successful ice cream truck business before emigrating to Canada in 1967. 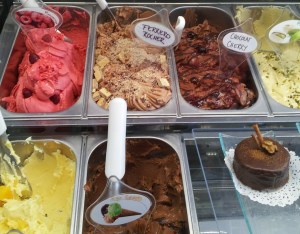 Three of their five daughters and a friend banded together to open this bright spot of Italian cool across the street from St. James Park. Their parents must have taught them well, bolstered by a summer course at Carpigiani Gelato University in Bologna, for the flavours are all-natural and the texture exceptionally smooth.

As a sign up front reminds us, gelato contains less than half the fat of ice cream, mainly because it’s made with less cream and more milk and egg yolks than premium ice cream.

Did you know that a carton of cheap supermarket ice cream may contain half air? Gelato has no air added, which translates into a dense, rich, creaminess.

Looking at the cherry topping and graham cracker crumbs festooning G’s billowing swirls of cherry cheesecake gelato, and the rich chocolate colour of the Ferrero Rocher, I doubt if this gelato is terribly lean, but you can always start with the small size ($3.50) or share a two-flavour medium size with a friend.

The hazelnut nocciola (nah-CHO-la) is pure bliss, pale pink grapefruit is creamy and tangy, the vanilla is amazing light and clean-tasting and the pistachio is a natural green from real nuts, not some bottled neon green.

Haven’t tried their pizza, but the focaccia square with dark leafy greens is a winner, and they make a great espresso and super-creamy latte.