It was a bad night for vegetarians and food phobics as a dozen top Toronto chefs handed out samples of raw meat and fish tartare chopped by hand to nearly 200 guests at the Fairmont Royal York’s sumptuous Imperial Room. 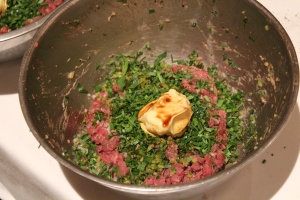 Not only did the Great Toronto Tartare-Off prove delicious, but it raised funds to build a school in Guatemala through Grapes for Humanity Canada, a worthy charity co-founded by wine lover and writer Tony Aspler.

And the winner is, Lorenzo Loseto of George on Queen Street, who chopped up raw cobia, a mild white fish some call the next cod, with black trumpet mushrooms and, I’m sure, other savoury ingredients I didn’t write down.

The crew topped each boat-shaped serving of tartare with a mast of tiny deep-fried fingerling potato chips stacked on a bamboo toothpick.

Here are a few more favourites, each paired with a fine wine from Ontario’s Malivoire, Tawse, Staff and Hidden Bench along with Napa, Greek and Portuguese offerings.

Didier Leroy of Didier demonstrated his classic French technique, mixing hand-chopped beef fillet with minced shallots, capers, cornichons and generous handfuls of parsley and chives. He moistened the mixture with homemade mayonnaise, a generous spoonful of Dijon mustard, a few judicious drops of Tabasco and “sauce anglaise”, a.k.a. Worcestershire sauce.

Fleur de sel and a fair bit of black pepper completed this memorable morsel with a kick, served as a perfect oval, or quenelle, on a perfect toast triangle.

Luma’s Jason Bangerter brought a garden of sprouts to garnish his fresh tuna tartare, flavoured with ginger and fresh citrus juices and tweaked with chili pepper jelly and a hint of espelette pepper from Spain’s Basque region.

Albert Ponzo from Le Select spooned finely chopped and seasoned bison on a cracker-like chicharrón, which sounds classier than fried pork rind, and topped it with a quail yolk coated in pistachio dust.

Patrick McMurray of Starfish couldn’t resist chopping oysters into his freshly-chopped steak and moistening it with oyster juice. The oysters actually overpowered the beef!

Mark Cutrara of Cowbell blended Latin American empanada flavours for his tartare, which included pickled jalapeno. Cutrara announced he and six Group of Seven chef pals have been invited to cook at the James Beard House in New York on Sept. 11. No word yet if tartare will be on the menu.